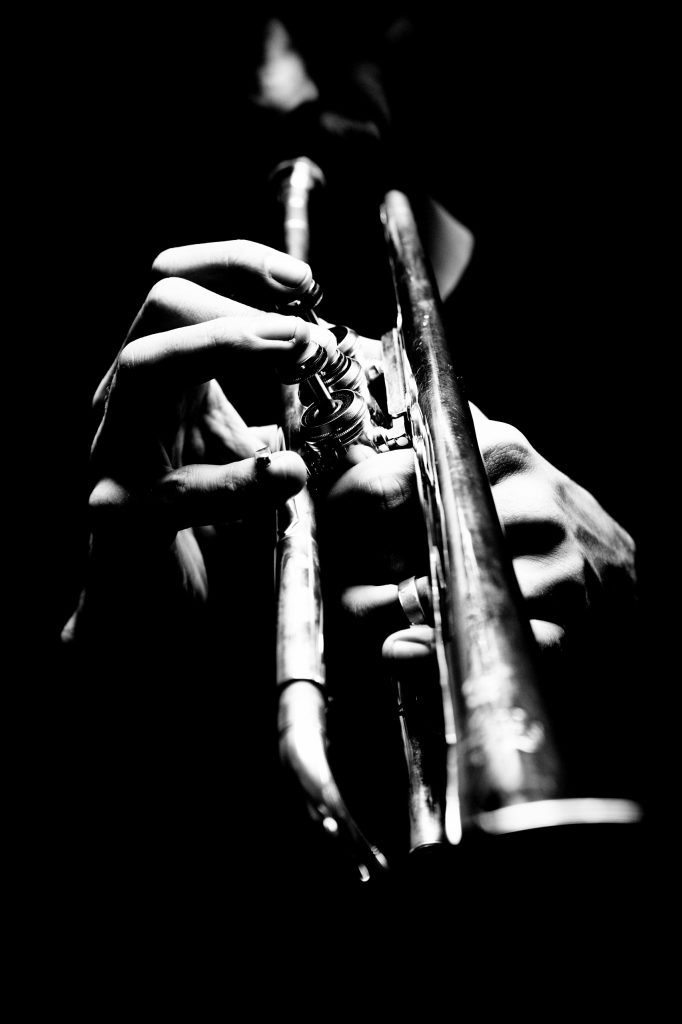 Marcus Rust grew up in a family of musicians in Schwerin. His love for traditional music from different cultures was ignited during a long trip to India in his youth.

Back home, on his return, he studied trumpet (jazz-rock-pop) in Dresden from 2005-2011. He also received a formative musical influence from the trumpeter Markus Stockhausen. The connection of ethnic music with jazz and improvisation determined his musical life from then on.

This integration of sounds also shaped his work with the organist Christian Grosch in the Duo ZIA. The duo dedicates themselves to the connection of jazz and traditional music from different cultures and jazz in the church.

In the band featuring the Ethiopian singer Feven Yoseph they combine traditional African elements with soul, R&B and reggae.

For the creative and orthodox fusion of Arabic singing with modern jazz elements, he and his band MASAA won the Bremen Jazz Prize in 2012, the Ruth Sponsorship Prize at the TFF in Rudolstadt in 2015, the German Record Critics' Prize in 2017 and the cultural prize north/west Culture Prize in 2020.

The melodies of the two dance around old Christian-Jewish chants from cultures around the globe; ask, answer and enter into dialogue with one another. It is the attempt to touch the foreign without absorbing it or destroying it. In their music, centuries-old christian melodies are combined with contemporary jazz, tradition and modernity enter into a lyrical liaison.

The melodies of the two dance around old Christian-Jewish chants from cultures around the globe; ask, answer and enter into dialogue with one another. It is the attempt to touch the foreign without absorbing it or destroying it. In their music, centuries-old christian melodies are combined with contemporary jazz, tradition and modernity enter into a lyrical liaison.

Feven Yoseph grew up in Dessie, one of the largest Ethiopian cities on the north-eastern edge of the Abyssinian highlands. She studied in Addis Ababa, the capital of Ethiopia, at the Mekane Jesus School of Jazz music, where she soon established a singing class as Ethiopia's first singing teacher. Soon afterwards she recorded her first album “chanting soul” with the most famous musicians on the Ethiopian jazz scene.

The release of this album was eagerly awaited, because with her songs she tears down prevailing barriers and builds bridges between the worlds that often exist separately: She combines spiritual and secular music, combines Ethiopian styles with jazz, reggae, soul and RnB and finally uses her ethio jazz as a mouthpiece for openness, spirituality and progress in her own country.

This website uses cookies to improve your experience while you navigate through the website. Out of these, the cookies that are categorized as necessary are stored on your browser as they are essential for the working of basic functionalities of the website. We also use third-party cookies that help us analyze and understand how you use this website. These cookies will be stored in your browser only with your consent. You also have the option to opt-out of these cookies. But opting out of some of these cookies may affect your browsing experience.
Necessary immer aktiv
Necessary cookies are absolutely essential for the website to function properly. This category only includes cookies that ensures basic functionalities and security features of the website. These cookies do not store any personal information.
Non-necessary
Any cookies that may not be particularly necessary for the website to function and is used specifically to collect user personal data via analytics, ads, other embedded contents are termed as non-necessary cookies. It is mandatory to procure user consent prior to running these cookies on your website.
SPEICHERN UND AKZEPTIEREN